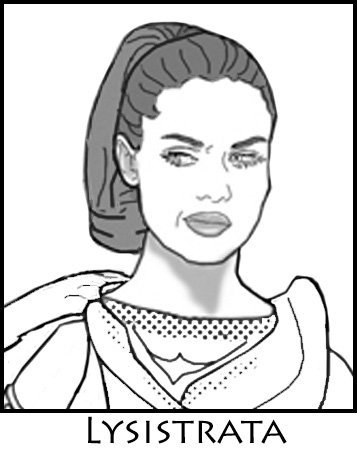 Sitting up to drink, Aristophanes was able to observe Lysistrata in detail for the first time. Pale-skinned, blemish-free, she was tall—taller than the playwright, who was two finger-widths shy of average height. A crimson silk ribbon circled the top of her head, ran down behind her ears, and wrapped around her long, nearly black hair, which cascaded down to mid-back like the tail of a horse. But much more fragrant.

Her chiton was held together at the shoulders by two pins, apparently costly. It was of fine linen; but slim, small-breasted, and small-hipped, her figure did not particularly excite the senses, in spite of the supple fabric. Her chiton was idiosyncratically dyed black, and she wore no himation over it.

She needed no makeup and wore none. Her eyes were dark and almost frighteningly large; her nose, long and thin. Her mouth, though, was on a smaller scale than the eyes and nose, giving her an air of intelligence rather than sensuality. She corresponded almost exactly to Aristophanes’ mental image of Homer’s Circe the witch.

Without doubt Lysistrata was attractive. But grave and cerebral, cold and observant, she wasn’t Aristophanes’ type.