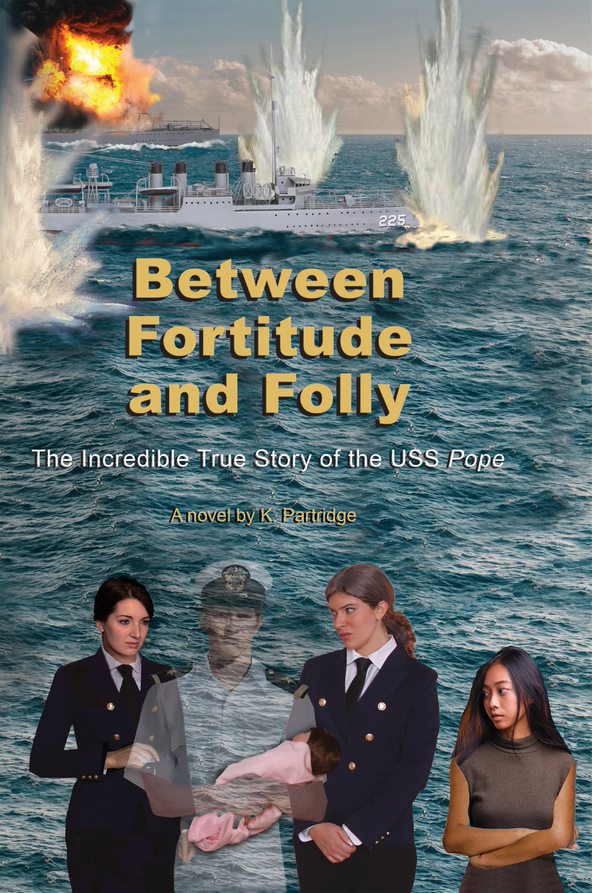 Between Fortitude and Folly Named a BlueInk Review "Notable Book"

Ensign Jack De Vries, a Navy Reserve officer in the Cyphers Department, enjoys a life of cocktails, billiards, dancing, and making love to his young mistress, Maricar Flores. In Manila, he becomes attached to two Australian navy signalwomen: Margaret Martin and Dorothy Walker. A well-meaning misstep gets him exiled to the USS Pope, an obsolete World War I-vintage destroyer—two days before the attack on Pearl Harbor. And he finds out that he’s responsible for another human life: a daughter he didn’t know he had.

The tiny, obsolescent U.S. Asiatic Fleet must now hold off the world’s most powerful navy; and among rough-hewn old China hands, Jack has to learn how to be a  artime officer at sea. In war, he discovers, it’s sometimes impossible to tell the difference between fortitude and folly.

Between Fortitude and Folly tells the incredible true story of the USS Pope. Like Tolstoy’s War and Peace, most characters are fictional, but the story of the war is all fact.

“STARRED REVIEW: Readers are immersed in the terrifying realities of war [and] … encounter a world usually experienced only by sailors. Maps, diagrams and other graphics help readers grasp the unique feel of a warship in battle…. But while details of parabolic distances and fuse times are central to the construction of a compelling story, Partridge’s skillful creation of credible, conflicted and fearful characters bring it all alive…. Ensign Jack De Vries and two Australian signalwomen, Margaret Martin and Dorothy Walker, ride a roller-coaster of emotions and passions in a world in which a Japanese victory appears certain. The two women, whose job ashore is to monitor ships’ at-sea transmissions, meet the sociable, caring and attractive Jack at an Allied naval base where the Pope was home-ported. A love story unfolds, but with which one?”

“It's the story of a good but ordinary man who, because of a moment of moral weakness, is swept up in global warfare…. [The novel is] just the ticket for an engaging blend of fiction and nonfiction…. K. Partridge demonstrates an ability to move from fact to high drama as dialogue and encounters between Jack De Vries and others move from weapons specs and nautical description to action and relationship-building efforts.”

“Between Fortitude and Folly is an informative, absorbing historical novel in which three adults who meet during wartime are endeared to one another…. Jack, a pool shark with an unromantic view of military life, expresses cynicism about the devastation caused by world governments…. As he’s caught in bombings and fire fights, Jack’s war experiences are detailed in violent terms, as well as in terms of how the human body and brain react to the realities of war. Later, his moody behavior and cryptic dreams reflect the resultant PTSD…. Margaret and Dorothy are beautiful, brainy, and tough. They interject dry wit into the serious tale.” 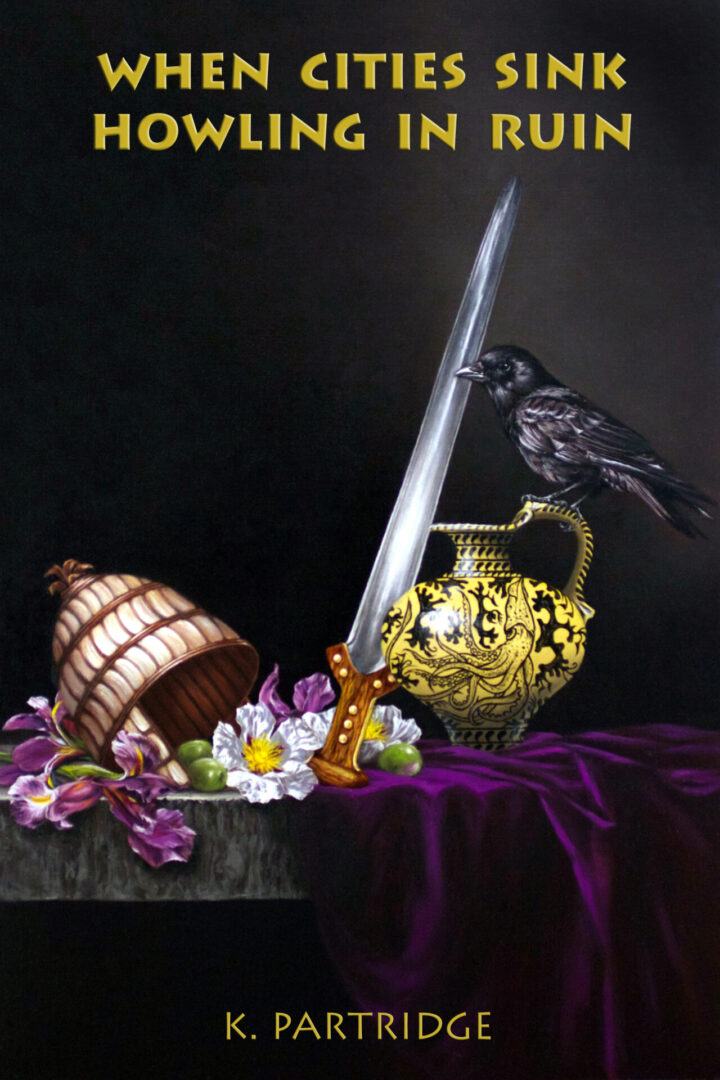 When Cities Sink Howling in Ruin

Eighteen-year-old Iakos is a Greek scribe who longs to escape the counting house and win fame as a warrior—but his mother forbids it. His uncle Aithon, a pragmatic sea merchant of forty, wants nothing more than a peaceful, stable Mediterranean in which he can ply his trade from port to port. He convinces Iakos’ mother to allow Iakos to go to sea with him, rather than risk her son running away to become a mercenary. But the world is to crush both of their dreams; for they live in the historical period known as the Collapse of the Late Bronze Age, when virtually every civilization in the eastern Mediterranean was destroyed—including Troy and Greece herself. Aithon and Iakos sail around the Mediterranean and witness city after city being razed, until finally the brutality touches them both in the most personal way imaginable.

[A] compelling story that weaves historical facts and interpersonal relationships in a uniquely satisfying, powerful manner…. Partridge excels in bringing pre-Homeric times to life in a way that belies the usual historical novel's reliance on dry facts and figures. While known history of these ancient times is woven deftly into the story line, it's the attention to detail that brings this world to life….

More so than most other stories of the times, Partridge's attention to emotional connections and details drives a story hard to put down...a tale of revenge, heritage, cross-cultural interactions, slaves and lords, and what happens when the entire Mediterranean world falls apart simultaneously…. When Cities Sink Howling in Ruin offers a lesson in anarchy and a world in flames that provides thought-provoking reflections for modern times.

Historical novel readers as well as those with little familiarity with the times or its peoples will find the account driven by battle, honor, and a brand of ethical and moral perceptions of struggle that imparts much food for thought.

In this sweeping historical novel, set during the collapse of the Bronze Age, a naïve young scribe travels the Mediterranean with his uncle [Aithon]. Although merchants, they are drawn into battle when the world order breaks down and civilization, as they know it, is on the brink of destruction….

The novel immerses readers in the sights and smells of Bronze Age warfare, both on land and at sea, creating visceral drama with detailed descriptions of terrifying life – or - death moments….

Scenic description is another great strength, as are vivid similes and metaphors, and humor that demonstrates the camaraderie between Aithon’s band of men.

A young scribe who thirsts for adventure witnesses Greece’s social collapse in this sprawling historical novel.

Background information is incorporated seamlessly …. The era’s fashion, weapons, and trade routes are covered in an authentic manner, too. Scenes of courtyard intrigue and mariners’ voyages help to distill Greek society’s collapse well, while [the narrator’s] seafaring adventures blend action, political jockeying, and bawdiness together….

With dramatic twists and an emotional, satisfying conclusion, the historical novel When Cities Sink Howling in Ruin resurrects violent conflicts from antiquity.

OLD MAN OF THE SEA

OLD MAN OF THE SEA 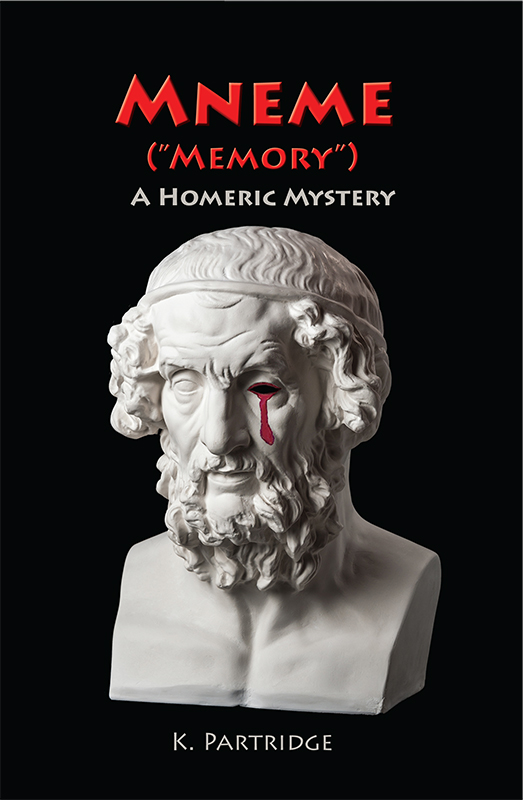 The poet Homeros (now called Homer) regains consciousness three days after a devastating head wound that has left him aphasic: an oral bard without the ability to speak or compose.

Homeros awakens not only to a life-threatening skull fracture and the loss of his livelihood, but to the news that there was another murder on the same night. Two days later, his poetic rival is found dead as well—and Homeros is a suspect in both deaths.  Now he must convalesce, regain the ability to speak, and find the killer responsible for the deaths and for his own crippling injuries. As he probes the crimes, memories dating back years suggest possible suspects.

But brain damage has left Homeros unable to recall the month preceding the attack. So in addition to his other challenges, he must reconstruct what led up to the crimes; and as he does so, memories of his own failures as a husband and father, some dating back eleven years, hint at his own guilt.

The book incorporates a sense of language and discovery that is compelling, lively, and … assure[s] a quick involvement with the story via poetic, lovely language….  readers are treated to a saga of injury, quasi-recovery, destiny, and early Greek culture that is hard to put down.

This is an observation that rarely can be made about historical pieces set in ancient times, but the language and personal approaches Partridge employs in the course of exploring Homeros' journey and mystery is simply exquisite, powering a quest for recovery and answers that is truly compelling.

Readers who enjoy the overlay of real historical facts outlined both before and after the main tale will especially appreciate the scholarship and detail that accompanies Mneme ("Memory”)'s vivid story of discovery and change. It's very highly recommended reading for anyone who seeks the complexity of historical fact, fictional drama, and powerful metaphorical descriptions.

The novel alternates between Homeros’s present and past.  With the help of his daughter Calliope and a sympathetic goatherd Dolios, Homeros unravels a complicated plot, interwoven with his composition of The Odyssey and the mythology of the “Hellenes” (Greeks), which concludes with an explosive ending.

Partridge excels at placing readers in the Hellenistic world of 750 BCE.  The inclusion of ancient Greek terminology (detailed in a glossary at book’s end) and illustrations of significant period relics enhance the reader’s experience.

Partridge crafts intriguing characters, especially that of Homeros, and creates parallels between the personalities of Odysseus and Homeros by intricately weaving Richard Lattimore’s translation of The Odyssey into the text.

With this imaginative work firmly embedded in the historical reality of the period, Partridge is sure to intrigue casual mystery readers and aficionados of Hellenistic culture alike.

Featuring secrecy, fears, and shame, this is a dark, insidious tragedy. Its patchwork exploration of families, which acknowledges that events may be perceived from multiple angles, makes Mneme (“Memory“) an intriguing historical novel.