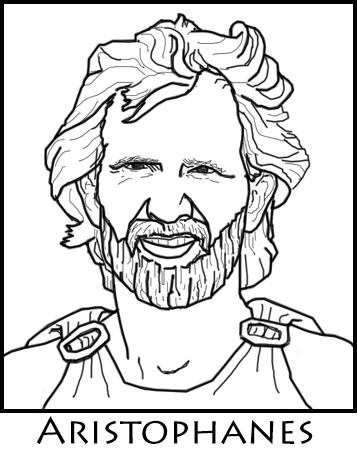 Aristophanes wanted to check the final version of the Narcissus scene one last time:

[Stage left: Narcissus is lying down staring at his reflection in a pool of water.]

Narcissus: Never have I beheld such divine beauty. I beg you, be mine, fair one!

Cleon: Narcissism can be a useful quality. The day I realized that it can be smart to be shallow was, for me, a deep experience. [Breaks into song.]

It’s a fact ♪ that everyone loves ♫ me (though I come off as just a bit needy).

Becoming such ♪ a great success ♫ was quite an ♫ undertaking. ♪

You say that ♪ I’m a satyr; inveterate ♫ dissimulator. ♪

Narcissus: [Shaking his head.] What a self-centered dipshit!