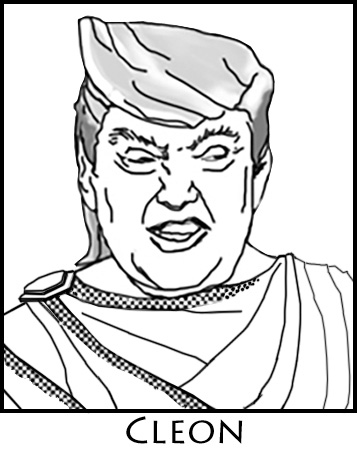 “General, sir,” said his son-in-law Scebylas, “I know it’s probably a painful question; but I wanted to ask your reaction to winning the election instead of losing it, as you intended.”

Cleon looked grave. “On papyrus, our opponent looked hard to lose to. We started well, but our support just kept growing. It just goes to show: No deficit is safe. I’ve spent a lot of time thinking it over, and I think we have to accept the fact that we faced a must-lose situation and came up short. We beat ourselves—we made the mistake of playing to not win, instead of playing to lose. At the end there we were really cutting into our lead, but we just ran out of time. But I’m not one to believe in moral losses: a win is a win, and you have to accept victory and move on. Over the long haul, you mustn’t get too high after the losses or too low after the wins. We need to forget about the past and figure out how to snatch victory from the jaws of victory.”

His son Phales frowned. “We just didn’t not want it enough, did we Dad?”

“In my opinion,” said Scebylas, “they just wanted it less than we didn’t want it.”